(To me, "Drink Responsibly" means don't spill any!)

This beer jokes page was started because I have always associated having a beer with friends and fun. They go together.

In keeping with the integrity of this website, the following pages will contain "clean" jokes. In order to make them unique however, I have chosen to format them in various ways that you won't find anywhere else on the Internet.

(I may use Funny Dog Emma to dispatch a "one-liner" for example, or turn a beer joke into a cartoon to make it more graphic. All the things that I already use on the site to improve jokes.)

Occasionally, I'll include a joke that may not strictly be about beer but it may deal with a bartender or something related to drinking, so I have included it here anyway. (It's my website so I'll do what I want. Pthhhhhh!)

However, lets just start off with a couple of quick beer jokes.

Note On The Fridge

I came home from the golf course today. The wife had left a note on the refrigerator: "IT'S NOT WORKING; I can't take it anymore! Gone to stay with my mother."

I opened the fridge, the light came on, AND the beer was cold. . .What the hell is she talking about?

Here's the theory behind us calling it Buffalo Beer:

It's like this...a herd of Buffalo can only move as fast as the slowest member.

When the herd is hunted, it is the slowest and weakest ones at the back that are killed first. This natural selection is good for the herd as a whole because the general speed and health of the whole group keeps improving by the regular killing of the weakest members.

In this way, regular consumption of beer, eliminates the weaker brain cells, making the brain a faster and more efficient machine. That's why you always feel smarter after a few beers!

I would like to share an experience with you about drinking and driving. As you well know, some of us have been known to have had brushes with the authorities on our way home from the odd social session over the years.

Well, I have done something about it: a couple of nights ago I was out for a few beers with some friends and had a few too many as sometimes happens.

But knowing full well I may have been slightly over the limit, I did something I've never done before - I took a bus home.

I arrived back safely and without incident, which was a real surprise since I had never driven a bus before!

Health Advice For Men And Women

Do you have feelings of inadequacy?
Do you suffer from shyness?
Do you sometimes wish you were more assertive?
If you answered yes to any of these questions, ask your doctor or pharmacist about beer.

Beer is the safe, natural way to feel better and more confident about yourself and your actions. It can help ease you out of your shyness and let you tell the world that you're ready and willing to do just about anything.

You will notice the benefits of beer almost immediately and, with a regimen of regular doses, you can overcome any obstacles that prevent you from living the life you want to live.

Shyness and awkwardness will be a thing of the past and you will discover many talents you never knew you had. Stop hiding and start living.

Beer may not be right for everyone. Women who are pregnant or nursing should not use it. However, women who wouldn't mind nursing or becoming pregnant are encouraged to try it.

Side effects may include:
Dizziness, nausea, vomiting, incarceration, loss of motor control, loss of clothing, loss of money, loss of virginity, delusions of grandeur, table dancing, headache, dehydration, dry mouth, and a desire to sing Karaoke and play all-night rounds of Strip Poker, Truth Or Dare, and Naked Twister!

Check for these warnings on beer labels:

WARNING: The consumption of beer may leave you wondering what the hell happened to your bra and panties.

WARNING: The consumption of beer may make you think you are whispering when you are not.

WARNING: The consumption of beer is a major factor in dancing like a dog with distemper.

WARNING: The consumption of beer may cause you to tell your friends over and over again that you love them.

WARNING: The consumption of beer may cause you to think you can sing.

WARNING: The consumption of beer may lead you to believe that ex-lovers are really dying for you to telephone them at four in the morning.

WARNING: The consumption of beer may make you think you can logically converse with members of the opposite sex without spitting.

WARNING: The consumption of beer may create the illusion that you are tougher, smarter, faster and better looking than most people.

WARNING: The consumption of beer may lead you to think people are laughing WITH you.

WARNING: The consumption of beer may cause pregnancy.

WARNING: The consumption of beer may be a major factor in getting your ass kicked.

WARNING: the crumsumpten of beer may Mack you tink you kan tpye reel Gode.

(Note: some of these beer jokes may have been slightly modified but I've given the original authors credit anyway if there was one.)

"I drink beer because I don't like to keep things bottled up!"

"Sometimes when I reflect back on all the beer I drink I feel shame. Then I look into the glass and think about all the brewery workers and all of their hopes and dreams.

If I didn't drink this beer, they might be out of work and their dreams would be shattered.

Then I say to myself, "It is better that I drink this beer and let their dreams come true than be selfish and worry about my liver!"
~ Jack Handy

"When I read about the evils of drinking, I gave up reading."
~ Henny Youngman

So, let's all get drunk and go to heaven!"
~ Brian O'Rourke

"Without question, the greatest invention in the history of mankind is beer.

Oh, I grant you that the wheel was also a fine invention, but the wheel does not go nearly as well with pizza!"
~ Dave Barry

To some it's a six-pack, to me it's a Support Group. Salvation in a can!
~ Dave Howell

Remember, "I" before "E" except in Budweiser!

Here are some of beer jokes from my "Funny Or Not?" category. You get to vote on them and then see how others have voted.

That way you can see if your sense of humor is the same as other people's or slightly warped! (Just kidding.)

A grasshopper walks into a bar, pulls up a stool, and orders a beer.

The bartender pours him a tall, frothy mug and says "You know...we have a drink named after you."

To which the grasshopper replies, "You have a drink named Bob?"

A gorilla walks into a bar, pulls up a stool, and orders a Steamworks Signature Pale Ale.

The bartender pours him a tall, frothy mug and says "That'll be five bucks."

As the gorilla is paying for his beer, the bartender adds "You know...we don't get many gorillas in here."

To which the gorilla replies, "At five bucks a beer, it's no wonder..."

I was having a beer in a pub last night when two large girls stepped up to the bar.

They both had strange accents so I said "Hello Are you two girls from Scotland?"

One of them screamed "Its WALES you blithering idiot!"

So I immediately apologised and said "Sorry, are you two whales from Scotland?"

Here are a couple of Funny Dog Emma's thoughts related to beer: 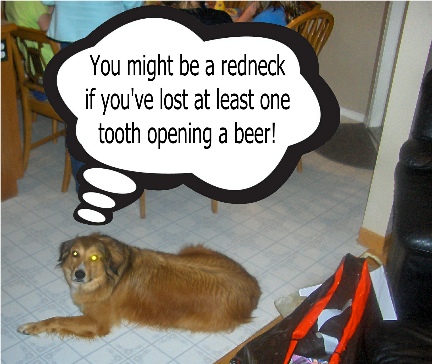 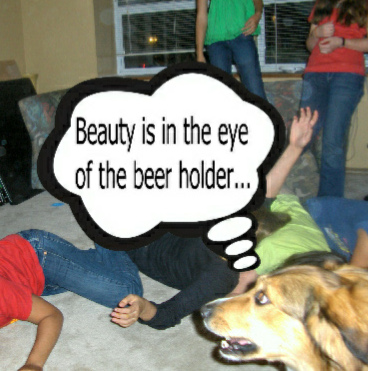 Sometimes when you are drinking beer, things go wrong. Here are some possible scenarios, their causes and how to fix them!

This just in: BEER - it's not just for breakfast anymore!

The other day someone told me I could make ice cubes out of leftover wine, but I'm confused.