Whether a joke is funny or not is always up to debate. Once you've read the ones below, then vote on them. You'll know right away what others think and then you'll know whether or not you have a strange sense of humor!

OK, that's a bit harsh because there are a lot of variables here. How many people voted? Did someone vote more than once? Are all the voters from the same part of the country or from a different culture? So you see, you may not be wierd after all no matter how you voted?

However, if you keep coming back over time and the majority of people are voting different from you, well then we might have a case!

One thing we know for sure is that different people have different senses of humor (or should that be sense of humors?). In my own circle of friends I know that what one friend thinks is funny some of the others may not so I decided to start this poll to find out whether people think certain jokes are funny or whether they're not.

There are lots that make the rounds of the Internet daily. What ones are truly funny according to the majority of viewers on this site at least?

Bookmark this page in your "Favorites" list and come back often and vote.

Here Are The Jokes

Hunter was 4 years old and was staying with his grandfather for a few days.

He'd been playing outside with the other kids, when he came into the house and asked, "Grandpa, what's that called when two people sleep in the same bedroom and one is on top of the other?"

His Grandpa was a little taken aback, but he decided to tell him the truth. "Well, Hunter, it's called sexual intercourse."

Oh, little Hunter said, "OK," and went back outside to play with the other kids.

A few minutes later he came back in and said angrily, "Grandpa, it isn't called sexual intercourse. It's called bunk beds and Jimmy's mom wants to talk to you."

My girlfriend told me once that I need to be more affectionate. Now I have two girlfriends! 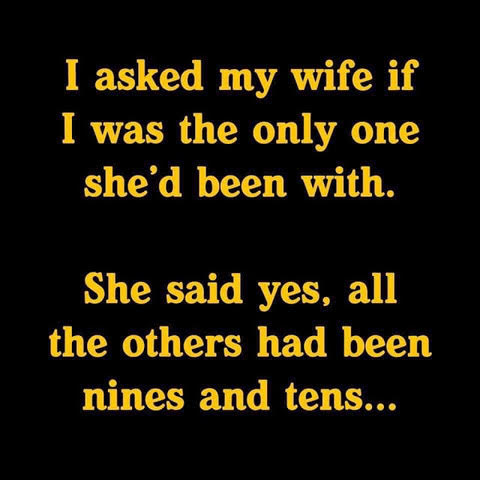 Go ahead. Vote below.

I told myself that I should stop drinking, but I'm not about to listen to a drunk that talks to himself!

Think this is funny? Vote below.

My wife sent her photograph to the Lonely Hearts Club. They sent it back saying they weren't that lonely!

My wife asked me to toast some bread for her.

I raised my wine glass and said, "Here's to bread."

A man from Kentucky walks into a chemist and asks for a bar of soap. The chemist says "Do you want it scented?" And the man says "No, I'll take it with me now!"

Click above and return to "Joke Central" and lots of other types of laughs.